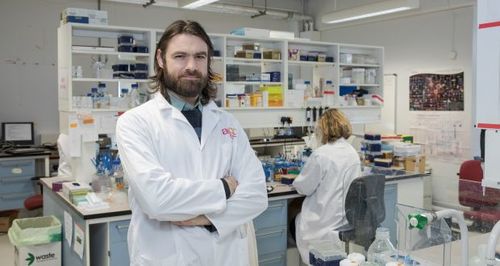 The breakthrough using Crispr (clustered regularly interspaced short palindromic repeats) genetic editing technology by a team including an Irish researcher has been outlined in findings reported in the journal Science.

“Crispr-Cas9 is a molecular scissors that we can use to cut and remove disease-causing mutations in our DNA,” explains Dr Ciaran Lee, a postdoctoral student at APC Microbiome Ireland research institute at University College Cork who took part in the research.

Dr Lee – a Marie Curie research fellow – did the experimental work at Rice University in Houston, Texas, and his data analysis was carried out on his return to Ireland. Leading researchers from Rice University, Stanford University and Aarhus University were also involved.

The life expectancy for people with SCD is between 42 and 47, and it affects in the region of 500 people in Ireland. It is most common among people of sub-Saharan African descent, while the numbers affected in Ireland have been growing over the past two decades.

Cas9 is a gene-cutting enzyme that uses a family of DNA sequences commonly known as Crispr, and then remove specific bits of DNA that scientists believe are linked with disease.

SCD is caused by a defect in adult haemoglobin, a protein in the red blood cells that carry oxygen around the body and give the blood its red colour. The defect causes red blood cells to become shaped like sickles or crescent moons. These abnormal cells can slow or block blood flow and cause pain, swelling, infections and vision problems.

In prior work scientists activated a type of haemoglobin present in the foetus, to compensate for defective adult haemoglobin. This was done, Lee says, by targeting regions of DNA called repressors.

“This approach is currently being tested in clinical trials with the early data showing great promise that Crispr-Cas9 gene therapy can result in a long-term cure,” Lee says.

The problem with this strategy, he explains, is that it does not remove the SCD causing genetic mutation from our cells. “Our study takes a different approach, using Crispr-Cas9 to target the disease mutation and replace it with the correct sequence.”

“While we and others have shown that this is possible in cells in a dish, this current study shows that when done at clinical scale this approach is efficient, safe and leads to correction of long-lived stem cells,” Lee says.

The study opens the door to similar gene-cutting strategies being adopted as a way to cure a range of genetic diseases. “These are all essential for developing an effective cure for sickle cell anaemia and other genetic diseases,” he points out.

The success of this research in a large-scale clinical trial on mice opens the door for trials in humans with SCD to begin. A US company specialising in use of gene-editing techniques to tackle disease is set to begin such trials later in 2021 or early in 2022.