Seven out of 10 new drugs are wasted. But there is a solution 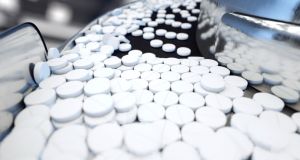 New technologies that could increase the number of life-saving drugs coming to market and help companies better monitor their production processes are among the exciting projects in the biopharma sector being supported by the Enterprise Ireland Commercialisation Fund.

The fund is aimed at supporting the creation of technology-based start-up companies and the transfer of innovative technologies developed in higher education institutions and research-performing organisations to industry in Ireland. It funds the development of technologies at all stages of the commercial pipeline, from early-stage research through to the point where it can be commercialised.

The CM-Nano project, led by Dr Luis Padrela of the University of Limerick, is addressing a problem that has plagued the pharma industry for many years. Seven out of 10 new drugs never reach the patient, resulting in billions of dollars’ worth of waste each year.

“These new drugs are typically very complex molecules, but many of them face challenges to their efficacy and their bio-availability in the body because they are not soluble in water,” says Padrela. “We deal with the problem by using nanotechnology. When produced at a nanoparticle level, normally poorly soluble drugs dissolve more effectively and become more successful in targeting a disease.”

Using nanotechnology in pharmaceutical production is not new but it is difficult to scale it up to industry level, he says. “It is fine at small batch levels but when you scale it up, everything changes.”

CM-Nano has developed a novel, continuous, nano-spray drying technology that offers a scalable process for the production of drug nanoparticles with improved solubility. The entire production process is simplified by coating these nanoparticles onto larger carrier particles.

The Commercialisation Fund has played a key role in the development of the technology. “Funding is a big thing,” says Padrela. “If we haven’t got funding we can’t do technical development. We also have weekly meetings and conversations with people from Enterprise Ireland. They follow up continuously and help guide you on the entrepreneurial road.”

The next steps for Padrela and his team will see further development of the solution to make it market ready. “We are looking for additional funding from industry for another six months to a year of development. Once the technology is ready for market, it will have to go through the regulatory approval process, which may take another few years.”

The Chromwatch project is aimed at addressing another pressing need for the biopharma industry. The industry requires advanced sensors and systems to monitor the manufacturing process to ensure both product efficacy and safety.

“Any process deviation can lead to serious consequences for both manufacturer and patient,” says lead investigator Dr Emmet O’Reilly. “Just recently, the FDA directed J&J to dispose of almost 60 million doses of its Covid-19 vaccine as manufacturing standards could not be guaranteed.”

Chromwatch is a unique process analytical technology (PAT) tool based on established technologies that is capable of providing contactless analysis of processes in real-time. In practical terms that means it allows operators to react to any process deviations before they become significant, resulting in improved quality and regulatory compliance.

The Chromwatch technology is superior to existing PAT systems, which use secondary sensors and other technologies to infer information about what’s happening in the process. “With Chromwatch, data generated is determined directly from scientific measurement, not inferred through chemometrics or secondary sources such as pH or conductivity,” says O’Reilly. “There is no physical contact between the sensor probe and sample, and the tool has been specifically designed for use in sterile environments.”

The team initially applied for Commercialisation Feasibility Funding. “That enabled us to scope out the potential market,” he says. “We met potential end users in 30 companies, and they really liked the idea and offered letters of support to back it.”

Armed with that feedback, the team applied to the Commercialisation Fund in early 2020. “The funding has enabled us to develop the idea to a working prototype that we can take to trial with end users. The prototype is being manufactured at the moment and we hope to commence trials in early October. It will probably take another 18 months to get to market after that.”

He says the wide range of supports available through the fund has been particularly important. “A key aspect is the support for the commercial aspects of the project as well as product development. Enterprise Ireland runs workshops on various aspects such as business plans, angel investing and so on every three months. That’s a great resource.”