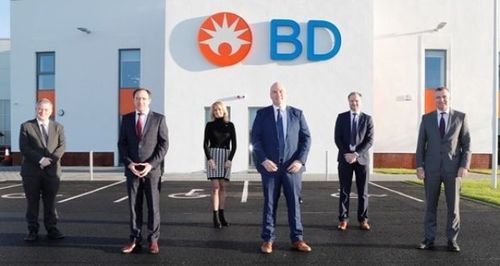 Medical technology company Becton Dickinson (BD) is to spend €70 million on a new research laboratory at its Limerick base, which will see the creation of the 130 jobs.

The company, which already employs 1,300 across four operations in Ireland - including 350 at Limerick, said the project would take five years.

“The investment will further position the facility as a hub for the development of smart, secure connected health and infection monitoring solutions in clinical and non-clinical settings,” the company said.

“ As a result, BD will add approximately 130 new, high-quality research and development positions in engineering and scientific disciplines such as software, electronics, hardware and immunology,” it said.

“ The expansion of the facility will include a state-of-the-art laboratory, workspaces and technologies to support cutting-edge innovation,” it said.

BD is one of the longest established IDA-backed medical devices manufacturer in the country and opened its Drogheda plant in 1964.

Tánaiste and Minister for Enterprise, Trade and Employment, Leo Varadkar TD said: “I had the pleasure of visiting BD’s facility in Drogheda last week to officially open the expanded site there, and I’m really pleased today to see this further good news, which will see 130 new jobs created and €70m invested in the Limerick facility.”

“It’s incredible growth and a testament to the talent and dedication of the existing staff in both locations. I wish the Limerick team the very best of luck with this impressive expansion,” he said.