Posted on about 2 months ago by Laurentina Kennedy 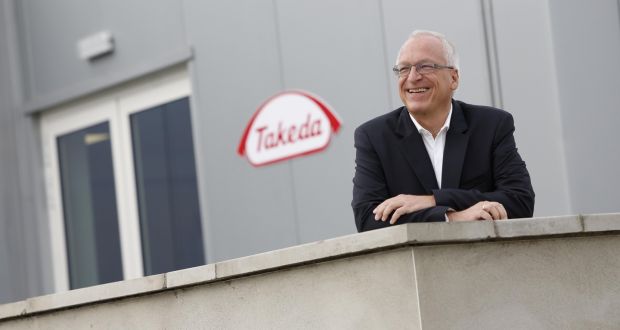 Thomas Wozniewski: Ireland is a ‘good place to access talent’ and has a ‘very open environment for innovation’. Photograph: Conor McCabe Photography

Talking to Thomas Wozniewski is like walking back into one of those advanced biology classes I always avoided in school. But behind all the talk of autologous and allogeneic therapies and mesenchymal stem cells is a story of another landmark first step for the medicines industry in Ireland.

The Takeda executive was in Dublin for the opening of the State’s first stem cell manufacturing facility. It is the latest ambitious move by the Japanese drug group that has bet big on the commercial potential of stem cell therapy.

And it is a beachhead for the Irish pharma sector. Stem cell therapy is at the cutting edge of modern medicine. Also referred to as regenerative therapy, it is designed to help the body repair tissue damaged by disease by treating it with cells that have been specifically engineered to do so.

There are two distinct approaches. One sees cells taken from the patient and then reintroduced to the same patient once they have been modified to address the disease. This is the autologous approach. Then there is the allogeneic side of things, where Takeda is working in this new Irish plant. This involves taking cells from a healthy host and, in a multistep process, turning them into cells that can treat a particular condition.

“It starts with material that is supplied by a healthy donor,” says Wozniewski, Takeda’s head of global manufacturing and supply. These are the mesenchymal stem cells. These can come from various places – bone marrow, fat, umbilical cord tissue or amniotic fluid. In this case, the tissues come from fatty tissue. “You isolate them, purify them, you grow them and then the cells can be used not for the donor but for many hundreds of patients.”

That’s the beauty of stem cells. Referred to as the body’s raw material, they are alone among all the body’s cells in having the capability of transforming into different types of cells.

It sounds simple, put like that, but it’s not. When the gastrointestinal therapy that will be produced at Grange Castle, called Alofisel, was approved by the European Union back in 2018, it was the first allogeneic stem cell therapy to get the green light for use on patients in Ireland and other EU states.

And as global manufacturing and supply officer, it has been Wozniewski’s job to build the plant that will deliver this new and innovative treatment. Doing that has preoccupied a large part of his attention over the past four years.

The plant was first announced back in 2018 just as Takeda was finishing a new oncology biologics plant on the same Grange Castle site in west Dublin. Initially seen as creating 70 jobs, it is now employing 100, with that number expected to double over the next couple of years in an investment of close to €40 million.

Ireland will be a global manufacturing base for the drug which is designed to treat a distressing condition relating to Crohn’s disease – complex perianal fistulas. These are wounds that go through walls of internal organs and the skin around the anus, affecting between a quarter and a third of all Crohn’s disease patients, according to recent academic studies.

They can be painful and life-limiting for patients and difficult to treat. Reports suggest that standard medical and surgical treatments provide remission for only about a third of affected patients one year on.

Alofisel was approved for use in patients for whom other therapies had failed after Takeda’s trials delivered remission in 50 per cent of cases compared to 34 per cent for those on a placebo.

But a key factor in this therapy is that you only have 72 hours to get it into the patient before it loses its efficacy.

That means Grange Castle will have a dual role. It will provide the therapy for markets in Europe and the east coast of north America. But it will also supply product further afield. However, to cope with the 72-hour deadline, this will be in the form of a frozen blood product. Takeda is setting up a series of satellite plants – for instance in California to serve the west coast of north America – where the final stages of the manufacturing process will be carried out to meet the tight deadline.

This is just one of the challenges Wozniewski and his team have had to overcome in building the new Irish plant. Even such routine tasks as normal quality control testing takes longer than the useful life of the product, so they have had to rethink that whole process.

And there have also been challenges in fine-tuning the supply chain for what are essentially made-to-order medicines.

“What is unique is our supply chain control, how it is set up,” says the German executive. “The hospital can book the product in our systems. They go into our ordering systems, they book a slot in our manufacturing system and then, when the product is ready to be shipped, it is like if you are ordering a product from Amazon: they can follow where it is. Did it get the plane, did it make the truck, will it arrive on time at the hospital to treat the patient? And it also tells us if that the patient has showed up.

“The process is unique but what is even more unique is the interaction with the customers and this logistics network and it requires a lot of discipline.”

The Grange Castle plant will be able to take the first steps in the process – harvesting the cells, purifying them and growing them to allow it build up inventory, or as they call it, master stock – ahead of time but then they have to wait.

At present the manufacturing batch size is sufficient only for one patient at a time: each one has 120 million of these engineered cells injected into the site of their wounds.

“Given the hospitals are booking directly into our system, we know what is coming,” Wozniewski says. “They have to book at least three weeks in advance and therefore we have a good overview and good transparency about which orders and which patients will turn up over the next few weeks.”

He says that, theoretically, Takeda could manufacture in batches that would treat three or five patients but, as he notes, the 72-hour shelf life would be severely limiting.

The therapy, which has been approved in the EU and Japan, is currently undergoing trials in the United States for what the company expects will be an approval there. As with most pharmaceutical drugs, it will be the therapy’s largest single market and Wozniewski says that, once the therapy gets the green light there, the company will be able to consider batch sizes that would treat five or even 10 patients.

Getting a fix on Crohn’s patient numbers is not easy but estimates suggest there are about a million in the US and a similar number in Europe. That provides an ample market for Takeda’s Alofisel, despite its orphan drug designation which indicates it is targeting a rare disease.

“It is basically a treatment which is part also of Crohn’s. It is not really a rare disease product where you have only hundreds of patients. In the end, there will be thousands of patients,” says Wozniewski, who, in line with regulatory rules and industry code of practice, is careful not to name the actual product. “Once the product is approved everywhere, and it proves it is an important new [treatment] option, it will be more a mid-sized product.”

Securing the investment was seen as a big win for the Irish Takeda team. The company has had operations here for almost 25 years – predating even its physical entry into the United States.

In the early years, the company focused on tablet manufacture at its Bray plant. But, in 2002, Grange Castle was selected as Takeda’s first active pharmaceutical ingredient (API) plant outside Japan.

It was the success of those ventures that saw Grange Castle chosen as the global manufacturing base of the company’s multiple myeloma drug Ninlaro. That unit was formally opened in 2019.

Now Grange Castle is home to the first stem cell manufacturing plant the company has built in Europe. Takeda, which now employs around 900 people here, does also manufacture stem cell therapies in Madrid but that plant was already up and running when Takeda took it over from Tigenix, formerly its Belgian partner in the drug’s development. Takeda bought Tigenix for €610 million back in 2018 at the time of the therapy’s EU approval.

That was also at a time when it was sizing up Irish-based Shire, which it also acquired that year in a $68 billion deal.

So why Ireland this time?

Most important, given the 72-hour shelf life of Alofisel, Takeda needed a site with good infrastructure, close to an international airport that was closely connected with Europe and also the US.

Having what Wozniewski refers to as a “strong base” here already as well as being a “good place to access talent and having a very open environment for innovation” helped. Ireland also has a history in sterile manufacturing and vaccines, two areas with skills that are seen as complementary to commercial stem cell manufacture.

And it has built strong links with academia, including NIBRT – the National Institute for Bioprocessing Research and Training based in UCD – which has specifically developed courses to help train the people who will operate the stem cell manufacturing plant.

While Wozniewski accepts that the market for talent has tightened considerably, he notes that this is not unique to Ireland and that, in any case, nowhere has “a tradition or supply of people with familiarity in cell therapy”.

Designing the new modular cell therapy manufacturing unit has not just been an exercise in pharmaceutical engineering. Takeda rarely misses an opportunity to showcase its sustainability agenda. The new plant will operate 100 per cent off green electricity and, Wozniewski says, will “most likely be the first one to meet the European criteria for zero emissions” as the company works towards being carbon neutral and having net zero emissions by 2040.

That affected both the design of the building and how it will operate, both in terms of energy grid efficiency and waste recycling, where it says it is converting all its waste product.

“It’s not a complication. We have a strong belief, I have a strong belief, that we have to do these things together,” Wozniewski says. “We believe that if you don’t consider sustainability, you will run into significant risks. In 10 years’ time, the standards will have changed even further and there will be a risk that you will have to write off existing plants or existing equipment and for new plants you should not do that.”

The Takeda manufacturing boss expects the new Grange Castle unit to be good for 30 years and its modular construction allows for flexibility if it does have to be repurposed in that time.

Family: Married to Karin, they have two sons.

Outside interests: Spending time with family and friends, and doing some sports to stay healthy and to balance out my work.

Something you might expect: Overseeing a worldwide manufacturing network, he spends a lot of time on the road although, post-pandemic, travel is likely to be more selective.

Something that might surprise: A passion for biodiversity – which, for instance, sees beehives at Takeda’s site in Bray and elsewhere – dates back to his childhood where his parents had a small gardening shop in Bavaria.