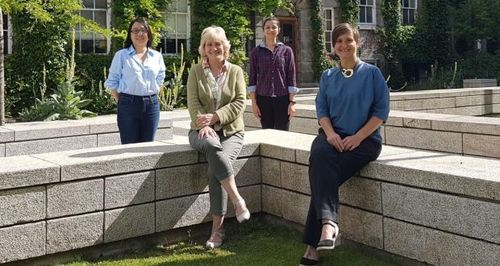 Research into natural products is on the rise again as scientists in Ireland become 21st-century “medicine hunters” searching for ingredients for drugs, cosmetics and functional foods in Irish boglands, coastal waters and other terrains.

The traditional use of plants in medicines, cosmetics and food predates both western medicine and scientific research. But as scientists began studying plants and microbes in the soil and water, they discovered a bountiful supply of ingredients for use in pharmaceutical drugs.

Consider paclitaxel (Taxol), the cancer drug derived from the Pacific Yew tree; galantamine, a drug based on a plant extract used to treat mild to moderate Alzheimer’s disease; and the plant-based Vinca alkaloids used to treat childhood leukaemia, to mention but a few.

Now a group of chemists at Trinity College Dublin are on a mission to find molecules with immuno-modulatory, anti-inflammatory and/or analgesic properties in plants and micro-organisms in Irish soils and waters.

Dr Helen Sheridan is an associate professor of natural product chemistry in the school of pharmacy and pharmaceutical sciences and academic director of NatPro, the new centre for natural product research at TCD. She is a passionate natural products chemist who sees potential in plants and micro-organisms for businesses in Ireland to develop. She also has a particular interest in ethno-pharmacology, which is the study of the traditional use of plants by cultures.

“At the NatPro centre we are looking at chemicals from natural sources to find new ways to prevent disease, to maintain health and to offset the advance of disease. There is also a great consumer interest in the natural world and a growing interest in functional foods to improve people’s health. We want to be a disruptive influence applying our multidisciplinary expertise and an innovative scientific lens to change the way of thinking about natural products and to look at new ways of progressing things,” she says.

Dr Sheridan’s interest in natural products goes back to the 1980s when she studied how a fungus infected and killed trees in Irish forests. “I was looking at the chemistry of the fungus at a time when the link between chemistry and biological function wasn’t as established,” she explains.

Her studies took her to the laboratory of Nobel Prize-winning chemist Derek Barton at the Centre National de la Recherché Scientifique in Paris, where she carried out research on anti-cancer molecules from the quassia family of plants – and on to Oxford University as a travelling fellow to study the chemistry of the fungus penicillium.

“We worked with enzymologists, biologists, botanists and were a multidisciplinary team before it became fashionable,” she says. She returned to Ireland to take up a lectureship in the school of pharmacy at TCD in 1985. She has been the phytochemical expert on the herbal medicines subcommittee at the Irish Health Products Regulatory Authority since 2000. She was the co-founder of the TCD campus company Trino Therapeutics, which brought a novel class of molecule through a long development process, starting with a fern and progressing to phase-one human clinical trials for inflammatory bowel disease. She has just been appointed on to a government advisory board on the bio-economy.

According to Dr Sheridan, there has been a recent upsurge of interest in pharmacognosy which is the analysis of the biological, chemical, biochemical and physical properties of plants, microbes and animals for medical ingredients. “In fact, there is limited expertise in the area of natural products chemists. We need this expertise to drive research and innovation for the rising tide in natural product industries in Ireland, which is one of the reasons we established NatPro,” she says.

Dr Sheridan cites the recent discovery by researchers at the school of biomedical sciences at the University of Ulster at Coleraine of a novel strephomyces culture in a limestone grassland soil, associated with Irish folk medicine, as a new source of antimicrobial investigation.

This bacterium inhibited the growth of a broad range of pathogens in vitro including gram-positive staphylococcus aureus. The study demonstrated the potential of this alkaline grassland soil as a new resource for the discovery of a broad range of antimicrobial compounds including those effective against multi-resistant gram-negative bacteria.

Snails also offer great hope to find new treatments for intractable pain, according to Dr Sheridan. For example, zinonotide (Prialt) an analgesic discovered in cone snails, is more potent than morphine and without the side effects.

These new discoveries give impetus to scientists bringing 21st-century tools and techniques to the study of natural products. NatPro has just been awarded €6 million funding for the bogland biodiscovery project, Unlocking Nature’s Pharmacy from Bogland Species. The project team, which will work with Teagasc, the National Parks and Wildlife Services, Irish Peatlands Council, Bord Na Móna among others, aims to identify potential therapeutic and commercial uses of native Irish bog plants, bog waters and the microbiome of unique bogland species. The cultural context will also be explored.

“Ireland has an established cultural use of plants in boglands and we have mined data from the 1930s Dúchas [the national folklore collection] at University College Dublin for references to the use of healing plants in Ireland at that time,” she explains. The NatPro centre also plans to develop a transition-year module on the scientific and cultural research of boglands.

Combining plant metabolomics (the study of the chemical variation in plant species), molecular biology and botany, the researchers will search for key molecules that could be used in the treatment of inflammatory, auto-immune, viral or neurodegenerative diseases.

Carbohydrate chemist Shipra Nagar is currently studying lichens, sphagnum mosses, yellow irises and bog myrtle at the NatPro centre. “My job is to isolate the polysaccharides, characterise their structure and send extracts to be tested for immune-modulatory or anti-inflammatory properties,” explains Nagar.

Jun Ying, a specialist in microalgae, is on a two-year Marie Curie fellowship at the NatPro centre. She is working with the Kerry-based company Nutra Mara which has seaweed-harvesting licences to develop new products in a bio-refinery. “I am growing micro algae to look at their biological activity, the chemicals produced and to see how to grow them in greater quantities,” adds Jun Ying.

Dr Sheridan says it’s important for students to understand the full context of developing their research. One key obstacle for the commercialisation of natural ingredients is that molecules from the natural world can’t be directly patented. However, processes used to extract them can be patented. And novel substances can be grown in laboratory bioreactors.

Dr Sheridan says sometimes parts of the chemical structures of molecules isolated from plants can also be used as chemical scaffolding in the development of new medicines or if a bacteria or fungus associated with the plant produces the same ingredient, it can be grown in a bioreactor.

She is, however, keen to point out that not all natural products are safe and further research is needed to identify potentially toxic molecules in the food chain. “An interesting example of this was captured in the Hitchcock move The Birds,” she notes. The movie is based on an event that occurred in California in 1961 when birds showered down on people in the streets. “The birds were disorientated after eating small fish which were contaminated with a poison called domoic acid that is produced by marine microalgae. In 1987, four people died and 100 were hospitalised on Canada’s Prince Edward Island after eating similarly contaminated mussels. There are lots of other foodchain toxins, some of which cause neurological disease.”

Dr Sheridan hopes the Covid-19 pandemic will give greater momentum into research for drugs and vaccines for other diseases. “We still have unmet clinical need in various cancers, conditions such as Parkinson’s and multiple sclerosis – and we still don’t have a vaccine for malaria.”