Posted on 8 months ago by Laurentina Kennedy

Putting Ireland at the forefront of medicine development for children 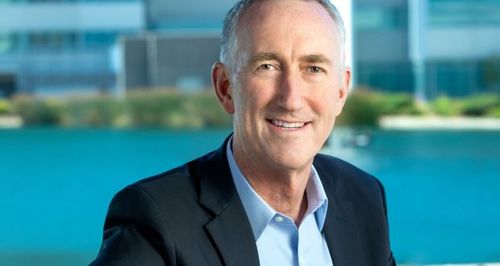 Gilead CEO Daniel O’Day: ‘He has set a target for Gilead to deliver at least 30 per cent of its sales from cancer drugs by 2030.’

When a big pharmaceutical company sets up a centre of excellence, you assume the focus is going to be on labs, where top scientists labour day after day in pursuit of the next miracle breakthrough. Not Gilead Sciences. The California anti-viral specialist – best known recently for the remdesivir treatment for Covid-19 – was in Dublin this week to formally open its new paediatric centre of excellence. But there are no labs at the centre’s docklands home, close to the Three Arena.
Instead there are banks of computers. This is modern medicine.
Gilead’s new base is charged with developing paediatric versions of the company’s existing medicines. Changing regulatory rules led the company to decide it made sense to ringfence its paediatric drug development in a standalone unit. But Gilead also hopes it will be to the fore as the business looks to establish itself as a cancer drug powerhouse.
“Paediatric is a natural extension of our pipeline,” says chief executive Daniel O’Day, the 30-year cancer drug veteran at Roche who Gilead headhunted back in 2019. “We have been a world leader in virology – in Hepatitis C and Hepatitis B and HIV – and now we are also branching into cancer care as part of our overall strategy for the future of Gilead.
“And in particular in cancer care, there are many cancers that are also present in paediatric populations and we needed a site that really concentrated on our ability to extend our cancer pipeline into the paediatric population.

“It really is centred on the workforce and the openness of the country to doing business in the EU. The ability to attract and retain top talent in biotech is really still exceptional in Ireland. So this was a natural place for us to do
Gilead, like most of the big pharma companies, already has an established presence in Ireland, employing more than 500 people, making it the Californian company’s largest operation in the EU.
The Irish business dates back to 1999 when it acquired a company called Nexstar that had a manufacturing base in Carrigtwohill. The Co Cork plant now manufactures a quarter of Gilead’s world supply of solid oral medications, for conditions such as Hepatitis C and HIV. It also has a financial shared services centre at Little Island in Cork and a distribution business in Dublin.

Clinical trials
The latest decision by Gilead is a welcome vote of confidence in Ireland as a base for clinical trials. It is an area where, despite our strong position in pharma investment, we have generally been seen as underperformers.
Clearly, given population size and the nature of modern trials, Ireland will never contribute the bulk of trial participants. However, Gilead’s investment is a clear signal that the State has the expertise and ability to manage such global trials.
But O’Day argues the Government can do more to attract such business.
“There is always a link between [clinical trials and] how fast a country makes new innovative medicines available to patients,” he says. “We are always comparing the next generation of medicines against the standard of care and, if the standard of care is not established in the country, it becomes more difficult to do the next generation of trials.”
Ireland, he says, needs to do more to get more rapid access to and reimbursement of life-saving medicines, particularly in cancer.
He cites Gilead’s Yescarta as an example. A modern car-T cell therapy for lymphoma, O’Day says it has been shown to quadruple the survival rate over the current standard of care in patients. But here in Ireland, he says, it has taken three years longer than in the UK and most of Europe to get those medicines available.
Part of the issue is the eternal battle between medical need and budget resources. O’Day argues that, especially with drugs for smaller patient populations, countries need to consider “both the patient size and the effect size to decide what they are going to reimburse”.
The other side is how fit for purpose the current pharmacoeconomic (value for money) drug assessment process is.
“I’m not an expert on the current system in Ireland but I can speak more generally. Many of the economic assessments in countries around Europe have not been updated for 20 years; they haven’t even been adjusted for inflation over those 20 years.
“So you look at the cost of a Quality Adjusted Life Year [the standard benchmark in such assessments], it has been stagnant and that becomes quite challenging when you look at modern medicines and the value for society.”

Covid has been good for Gilead, even if O’Day might not have appreciated it quite as much during his Dublin visit, when he was diagnosed with the virus – disrupting his itinerary and consigning our interview to Zoom as he isolated in his hotel room. The company’s drug remdesivir has become the go-to therapy in many countries for treating patients hospitalised with the virus.
Within four months of the pandemic breaking, Gilead had positive clinical trial data; within six months, it was approved in the US for hospitalised patients.
“It is used in 50 per cent of hospitalised patients and it is significantly reducing their hospital stay and has been shown in real-world evidence to reduce mortality as well,” O’Day says.
That delivered a healthy bounce to Gilead’s bottom line, putting the brake on a fall in revenues as generic competition ate into the company’s hepatitis portfolio that had long been a mainstay of the business.
Turnover jumped almost 10 per cent in 2020 to $24.7 billion (€22.7bn) and by another 10.6 per cent last year to $27.3 billion, with the anti-viral remdesivir more than offsetting falling sales of HIV and hepatitis drugs. The Covid-19 medicines accounted for $5.6 billion of 2021 revenues. With the pandemic on the wane, the company has already guided markets to lower sales this year.But the success was no accident, O’Day says.

“The reason that all happened is because of decades of investment – long before I came – in emerging viruses. Because of their leadership in virology . . . the group has been studying coronaviruses for years, and in particular agents that could be effective against coronaviruses, including SARS, MERS and others.

“Remdesivir had been studied in different forms as an early med for about 10 years on different types of viruses and it was shown to be quite effective against some, not so much the hepatitis family of drug but against the coronavirus family. But with SARS and MERS, for instance, thankfully those outbreaks were quite contained globally and also quite short in terms of lifespan. It turned out remdesivir was not needed for those whereas it was definitely needed for Covid-19.”

O’Day sees Covid and its mutations as a long-term health challenge and the company is currently working on an oral medication for patients.

If Covid was a case of being in the right place at the right time, it is on the company’s delivery of its ambitions for cancer care that O’Day will ultimately be judged.
He has set a target for Gilead to deliver at least 30 per cent of its sales from cancer drugs by 2030. That goal has seen the company invest $31 billion in three acquisitions – notably a company called Immunomedics – in O’Day’s tenure. Critics claim the M&A strategy has been lacklustre with little evidence of a return on investment. O’Day strongly disagrees.
“I am really proud of what the team has done over the past three years. We have really put together a world class portfolio,” he says. But, he adds, such investments take time to deliver on potential.

He points to scepticism over the purchase of cell therapy business Kite five years ago, before his arrival.

“It takes time to run new clinical trials, especially when you acquire a smaller company with fewer resources with a medicine or a technology that has great potential. Five years after the Kite acquisition, just last year, we announced a groundbreaking study that was just approved in the US, where we showed a four-fold difference with stem cell transplant in lymphoma. Many people out there, who at the time questioned the acquisition, understand I think the value this brings to patients.”

With Immunomedics, he notes that when Gilead bought the business, its Trodelvy drug was being studied only for a couple of disease areas.
“We have expanded it to many more disease states but those trials will take until 2025 or so to read out,” O’Day says. “I think there is always a bit of a time lag. I understand people will have different perspectives on the timeline but I firmly believe in the potential of this portfolio. That’s based on [my] experience not just optimism.
So is he sticking with the 30 per cent target?
“Absolutely, very much so. I think that is a somewhat conservative view,” he says. “We have everything in our hands right now to meet the goal.”
Will that involve more spending on M&A?
“We will obviously continue to look for new advances in the field out there, something that can complement our portfolio as a normal course of business but I don’t think along the same lines of the capital we have put to work over the last three years. We have really brought inhouse what we need and we have frankly more than enough to do across different disease states.”
The new Dublin centre of excellence looks well set to be a core part of that strategy.

Name: Daniel O’Day
Age: 57
Position: Chairman and chief executive, Gilead Sciences
Family: Married to Mara, they have three children, Tierney, Meghan and Brendan
Outside interests: He’s a keen swimmer and competitive athlete, and enjoys spending time with family, reading and music
Something you might have guessed: Yes, he is Irish-American, third generation, and very proud of it. The family on his father’s side came from Ennis in Co Clare
Something that might surprise: He only joined Gilead three years ago but his connection with the company goes back much farther. At Roche, he was for a time the man overseeing Tamiflu, a flu treatment developed by Gilead at a time when it was too small to properly leverage the opportunity it presented, so they sold it to Roche.