Posted on 6 months ago by Laurentina Kennedy 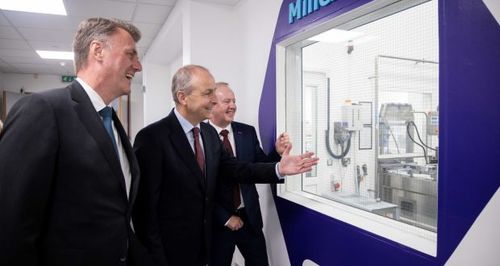 Matthias Heinzel, Merck executive board member and CEO Life Science (left) with An Taoiseach, Micheál Martin and Martin McAuliffe, head of the Cork operations, at the company’s announcement of a €440 million investment in the group’s Irish business.Photograph: Michael O’Sullivan /OSM PHOTO

Life sciences giant Merck is planning a major €440 million investment to expand its Cork-based manufacturing facilities, which will create more than 370 new jobs.

The announcement, one of the most significant in the sector in recent years, is seen as a major vote of confidence in the Irish economy.

Merck said it plans to expand its membrane and filtration manufacturing capabilities in Ireland. The investment will increase capacity at its current Carrigtwohill site and finance the construction of a new facility at Blarney Business Park, both in Cork.

The investment, which is the largest in a single site ever for a life science business in the Republic, will create more than 370 permanent jobs by the end of 2027, it said.

With the more than €290 million expansion in Carrigtwohill, the company is adding a manufacturing facility for the immersion casting of membranes. “These membranes support novel and gene therapies, as well as applications like virus sterilisation, plasma separation and finger-prick rapid testing,” the company said.

Merck will also invest €150 million in a new new filtration manufacturing facility at Blarney Business Park. “Once fully operational, it will increase Merck’s global manufacturing capacity and supply customers producing both traditional and novel treatments and therapeutics,” it said.

Merck said it aims to increase group sales to about €25 billion by 2025. To achieve this growth target, the company has increased its planned investment between 2021 and 2025.

“Beyond that, it is a statement of Merck’s commitment to our Irish operations.”

Taoiseach Micheál Martin welcomed what he described as a “ very significant announcement from Merck, which underlines the company’s commitment to doing business in Ireland”.

“This investment, the largest in the history of Merck Life Science, speaks volumes about our capacity to provide the right conditions for multinational organisations to grow their operations,” he said.